I want to take time to explain why Toni and I are taking the trip we are about to embark on tomorrow during this year's spring break. It began when I read the article linked HERE in this month's issue of Biblical Archaeology Review...and, Toni agreed to go with me to see the display. 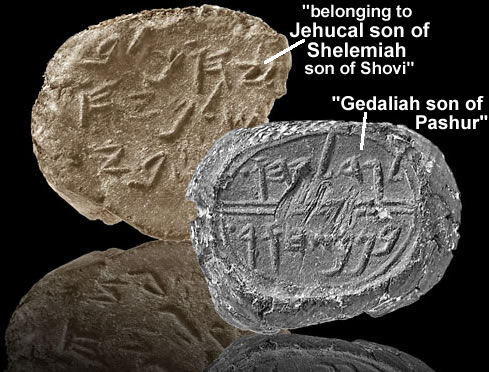 In 2000 BC the Canaanites were living in what is today the land of Israel and had occupied a city they called Salem. This city was 10 acres located on a ridge of core bedrock surrounded by very definable valleys: the Hinnom, the Central and the Kidron Valleys. These natural formations provided a natural source of protection for this ancient walled city which also had the necessary natural water source known as the Gihon Springs which still flows today.

Abraham met with Mechizedek in the Kidron Valley around 2000 BC and offered Isaac on Mount Moriah (which was 15 acres outside the north walls of the city at that time.) In 1400 BC Joshua's men killed the Canaanite king of Salem, Adoni-Zedek, when they took the Promised Land, but it was not until the next generation that the city of Salem was captured, burnt, and left in ruins. The Jebusites soon resettled Salem and occupied this natural fortress until David took the city from them in 1000 BC to be used as his capital city. David took up residence in the north portion of this 10 acre walled city. The city's fortress was built in the north wall because this was the only approach to the city that was naturally weak. Invading forces could come down Mount Moriah to easily attack the north wall of the city.
David built a new palace in the north area of the city and his son Solomon expanded the palace complex and increased the governmental buildings in this same area. The image below show the location of David's royal palace that would be handed down through out the dynasty of the Davidic line of kings who would rule the southern kingdom of Judah until its destruction by the Babylonian Empire in 586 BC. When the Persian King Cyrus sent the Jews back from Babylon to their homeland in 538 BC he appointed Zerubbabel  to serve as the governor of this reoccupied land. Zerubbabel returned with the people to Jerusalem and took up residence in the royal palace of the former kings of Judah.
As archaeology has explored the historical remains in the city of Jerusalem there was always a quest to find the royal palace of the kings of Judah, which would have included part of David's original palace. Since the original city was only 10 acres and according to Scripture and the natural layout of the city it was fairly easily to identify where this royal palace complex should be located once the parameters of the ancient city where identified through correct archaeological principles and practices.
When we were in Jerusalem in 2007 Eilat Mazar had just uncovered and identified (2005) a large structure from the days of the kings of Judah, but many things where unconfirmed. In fact, we could only walk over the framework that covered the excavation site, but as we walked over I did take the liberty to reach my camera into an opening and blindly snap the below photo. We suspected this could be David's Palace, but the excavation was not complete and skeptics where still accusing Ms. Mazar of  "sensationalism."
It wasn't until 2008-2009 that it became clear that the royal palace of the kings of Judah had been located. It was called the "Large Stone Structure". It sat on top of a sixty foot tall, strong retaining wall known as the the "Stepped Stone Structure" that had been uncovered in the 1920's and suspected of being built to support a large building complex above.
During her excavations of the royal palace of the kings of Judah Eilat Mazar discovered two bullae. A bulla is the small clay impression left when it is pressed with a seal or signet ring. These were used like we use a written signature on a contract to confirm the authenticity and legality of a document. The clay impression is called a bulla (bullae for the plural). These two bullae Mazar discovered were less than half an inch in diameter.
The first was found in 2005 inside the royal palace with writing from the 500's BC that translates

This clay impression (bulla) is described as being in mint condition and is a mere 0.4 inches in diameter which is almost the size of a dime which is about 0.7 inches 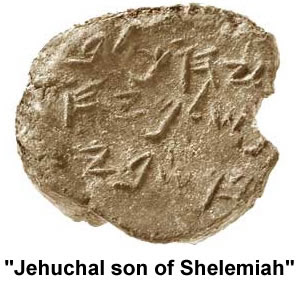 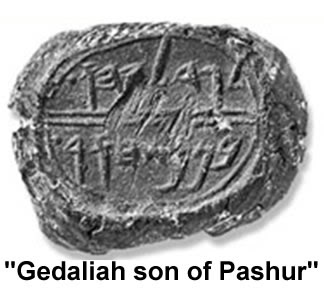 Beginning in the year 640 BC Jeremiah was sent by God to proclaim God's word and Gods' will to:
Because the people had forsaken God, Jeremiah was sent to tell the people to repent. By the year 587 the people had not listened, the priests had forbidden Jeremiah access to the temple and the royal officals were calling Jeremiah a traitor even though his warnings of Babylonian invasion had began to occur.  The Babylonians had come into the city twice: Once in 605 BC to take captive the royal children like Daniel and again in 590 BC to take the skilled industrial workers like Ezekiel  into Babylon to build their cities, chariots, etc.
Now in 587 the royal officials convinced the weak, insecure king Zedekiah that Jeremiah was a traitor for telling the people to surrender to Nebuchadnezzar, king of Babylon, instead of fighting. The foolish king of Judah gave his complaining royal officers permission to throw Jeremiah into a cistern located in the palace court yard. Jeremiah 38:1 begins the text that NAMES these men, quotes their words and describes their actions from 587 BC from the royal palace in the City of David:

1 Shephatiah son of Mattan, Gedaliah son of Pashhur, Jehucal son of Shelemiah, and Pashhur son of Malkijah heard what Jeremiah was telling all the people when he said, 2 "This is what the LORD says: 'Whoever stays in this city will die by the sword, famine or plague, but whoever goes over to the Babylonians will live. He will escape with his life; he will live.' 3 And this is what the LORD says: 'This city will certainly be handed over to the army of the king of Babylon, who will capture it.' " 4 Then the officials said to the king, "This man should be put to death. He is discouraging the soldiers who are left in this city, as well as all the people, by the things he is saying to them. This man is not seeking the good of these people but their ruin." 5 "He is in your hands," King Zedekiah answered. "The king can do nothing to oppose you." 6 So they took Jeremiah and put him into the cistern of Malkijah, the king's son, which was in the courtyard of the guard. They lowered Jeremiah by ropes into the cistern; it had no water in it, only mud, and Jeremiah sank down into the mud. 7 But Ebed-Melech, a Cushite, an official in the royal palace, heard that they had put Jeremiah into the cistern. While the king was sitting in the Benjamin Gate,

Now, this spring break Toni and I are driving to Oklahoma to see  the first public display of these two bullae that were found in the royal palace of the kings of Judah in 2005 and 2008. These bullae bear the impression from the signet rings of two biblical personalities who served in the royal palace of the kings of Judah in 587 BC and participated in one of the most infamous persecutions of the great prophet Jeremiah.
Here are some photos I took from inside the royal palace in 2010. This was the royal residence of the King David, King Solomon and the Kings of Judah from 1000-586 BC and then used by the government that returned from Babylonian captivity in 538.
Posted by Generation Word Bible Teaching Ministry at 3:54 PM

If you want your ex-girlfriend or ex-boyfriend to come crawling back to you on their knees (no matter why you broke up) you got to watch this video
right away...

(VIDEO) Win your ex back with TEXT messages?

Generation Word Bible Teaching Ministry
Galyn and Toni have been married for 39 years and have six sons ages 21-32. They are a US Marine, a Colorado snow board coach, a computer engineer for the US Air Force, a coffee roaster in Memphis, another son who is an airman in the USAF. Galyn teaches Bible class three times a week. He is a middle school shop teacher and a former high school coach. Galyn is the author of "Hope for America's Last Generation" and the 450 page textbook "Framework for Christian Faith". His most recent book is "Jerusalem: History, Archaeology and Apologetic Proof of Scripture." He has distributed at no charge over 100,000 cds into over 40 countries and is listened to online daily by people in the U.S., Europe, Asia, Australia and Africa.